This is a story of a minor conflict somewhere in Africa. Although the characters are ficticious, it is based on real events, taken from the author’s own experience. As with so many conflicts in Africa, it is a mixture of politics, ethnic rivalry, settlers versus indigenous people and mineral hungry countries. Set in Mwanza, a remote ‘r and r’ town, it is about the lives of a squad. Some are rookies, others battle hardened vets, but all attempting to confront an often invisible enemy in the harsh savannah bush land. 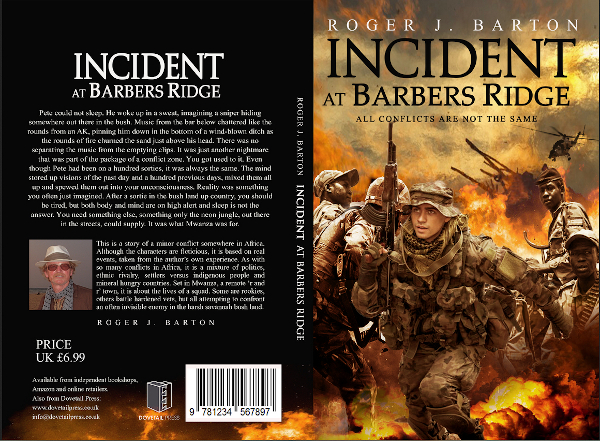 “Pete could not sleep. He woke up in a sweat, imagining a sniper hiding somewhere out there in the bush. Music from the bar below chattered like the rounds from an AK, pinning him down in the bottom of a wind-blown ditch as the rounds of fire churned the sand just above his head. There was no separating the music from the emptying clips. It was just another nightmare that was part of the package of a conflict zone. You got used to it. Even though Pete had been on a hundred sorties, it was always the same. The mind stored up visions of the past day and a hundred previous days, mixed them all up and spewed them out into your unconsciousness. Reality was something you often just imagined. After a sortie in the bush land up country, you should be tired, but both body and mind are on high alert and sleep is not the answer. You need something else, something only the neon jungle, out there in the streets, could supply. It was what Mwanza was for.”

The Huey helicopter approached Mwanza at treetop height. Anything higher presented a better target for the rebels. They would have been like a sitting duck, silhouetted against the blue sky and a perfect object for an RPG to hit. Hidden in the long grass, the rebels had lots of practice in honing their skills on the frequent flights coming in or taking off. It was a dangerous flight path, but safer than the roads, which were likely to be mined. John, the squad leader shouted above the drone of the engines to the pilot:

“You’ve dodged the bastards this time. Nice going! Any lower and we could have trimmed some of the top branches. Watch yourself on the way back. Fire a few rounds into the trees to keep them occupied!”

“Thanks lieutenant. Probably see you back here in a week or so.”

The rebels were always hiding in the burnt grass and thorn trees, but they changed positions frequently and no one knew exactly where an attack might be coming from. Bringing down a helicopter with an RPG or heavy machine gun fire would be a valuable prize. It not only made a spectacular fireball, but back at their base on Barbers Ridge they would be hosted as heroes.

On board was ‘A’ Squad, a unit of the security forces, who had been chasing what they referred to as ‘infiltrating rebels’ up country. It was a so-called ‘search and destroy’ mission, near their northern border. The rebels had just attacked a village they deemed as friendly to the troops. It was in the middle of nowhere, easy to attack and difficult to defend. By the time the army arrived there, the attack was over. The village may have been friendly, but the territory was hostile. There were miles of open plains and savannah land, with occasional waterholes, if you were lucky.

The savannah made all who entered its territory an enemy, but it made everyone equal. The dust clouds and the shimmering heat haze played bizarre games and you were never sure who was the worst adversary, the rebels or the terrain.

The squad had lost their adversaries who seemed to have vanished into the countryside before their eyes. It was as though they had been swallowed up in the heat haze, and had become part of the sand and rocks. Now it was the middle of the dry season in this part of Africa and the heat dried every particle of water from the sand and parched trees. The merciless sun turned them into grotesque twisted wood, as they desperately tried to escape the heat.

The scorched landscape meant fewer places to hide. Not just for the rebels but for ‘A’ Squad coming in on the weekly Huey ride for a seven-day ‘r and r’ break.

There were ten in the squad that day plus a veteran war correspondent. They were being flown out from Cloud Nine, the name everyone used for the military strike base. They were all anxious for the flight to be over.

John Hicks was the squad leader, not much older than the rest of the troop, but showed an age way beyond his years. The drone of the helicopter blades was for him a background melody, a sound completing the image of sorties into savannah land. His skin was burnt like the red dust of the plains, his face trying to hide lines engraved not by years, but by what he had seen.

The painted pad lines came up to meet the Huey’s landing struts. Jock was the first out, lifting his M249 machine gun through the open door way. He caressed the killing machine in a way you would greet a lost love. It was his lifeline and a protective friend. On many sorties it proved to be true. Half to himself and half to the air he mused:

“Not needed this time round, baby.”

John shouted as the last man jumped onto solid ground.

He led them off the landing strip. There was only one way to go. The neon lights of Central Strip competed with the bright sun for attention. Neon always came out on top.

It was good to see them all come back. Sometimes not everyone made it, but that is what conflicts are about. Everyone accepted this and it became routine. The killing. It’s what soldiers do, especially when they believe in their cause. Sometimes out there in the savannah it sent men crazy. It was the waiting, the heat, or an enemy who was, or seemed everywhere. Everything could have been to be your enemy and unless you came to terms with the savannah, it too could kill you.

The rebels seemed part of the environment. They were born into it, used it, and did not fight it. They could merge in and out of the sand and rocks. Only the seasoned vets of the squad could be like this. You had to learn and learn fast. The savannah does not forgive.

The squad all had a blank look, with eyes staring through you, still seeking the enemy out there in the savannah bush land. It was an enemy they had seen before and would soon see again,

Anyone could ask them, “What did you do out there?”

From most there would be no reply. All the drugged shit they took just added to their blank look. Anything out there could be imagined. And just as easily forgotten.

But this was a time for a rest and recuperation break, in Mwanza – or ‘r & r’ as the military called it. Booze, drugs and girls, it was what Mwanza was for, and what it did well.

Pete Sider had been sent from the Globe newspaper in Terranda, the capital, as their ‘special correspondent’, to send dispatches about how the conflict was going. None of the squad knew exactly what a ‘special correspondent’ was, but they suspected he was in the pay of the military. Not exactly a spy, but not far from it. He still had to gain their trust. But whatever suspicions the squad held, Pete was a seasoned reporter and had cut his teeth on conflicts and life in the most remote locations of the savannah heartland. There wasn’t much he hadn’t seen, and that was why he was here.

He was to get a first hand report of the front-line conflict. ‘Just report what you see’ he was told. ‘Our readers deserve to know what is going on and don’t want doctored gung-ho crap from commanders half-drunk on glory, and telling what they think the newspapers should know’.

Pete lay on the fleapit hotel bed thinking about the past week spent on search exercises up country with the new squad. John had to get them into a cohesive unit, operating like the ants that were everywhere and would attack you just because you were an alien in their territory. It seemed every creature in the bush was hostile and knew you were the enemy. The squad had to act likewise. Each member was an individual, but would have to know instinctively what everyone else was thinking and know they could be relied upon. Their lives depended upon it.

It could have been in any of a hundred r and r retreats in up country Africa, and Mwanza was no different. Pete watched the ceiling fan whirling stale air from one corner to another and was thankful for the only isolation he had known for a week. This was the nearest thing to being cool, away from the burning sun and ants eating your boots. He had to make the best of what this brief respite had to offer, as very soon the unit was being assigned on a mission in the most hostile of up country terrain. No one knew precisely where or why except John the squad leader, and he never gave out any secrets.